This text provides more background on Pojangnongbang, detailing the reasons why it is important to priortise new forms of urban development alongside the potential benefits. 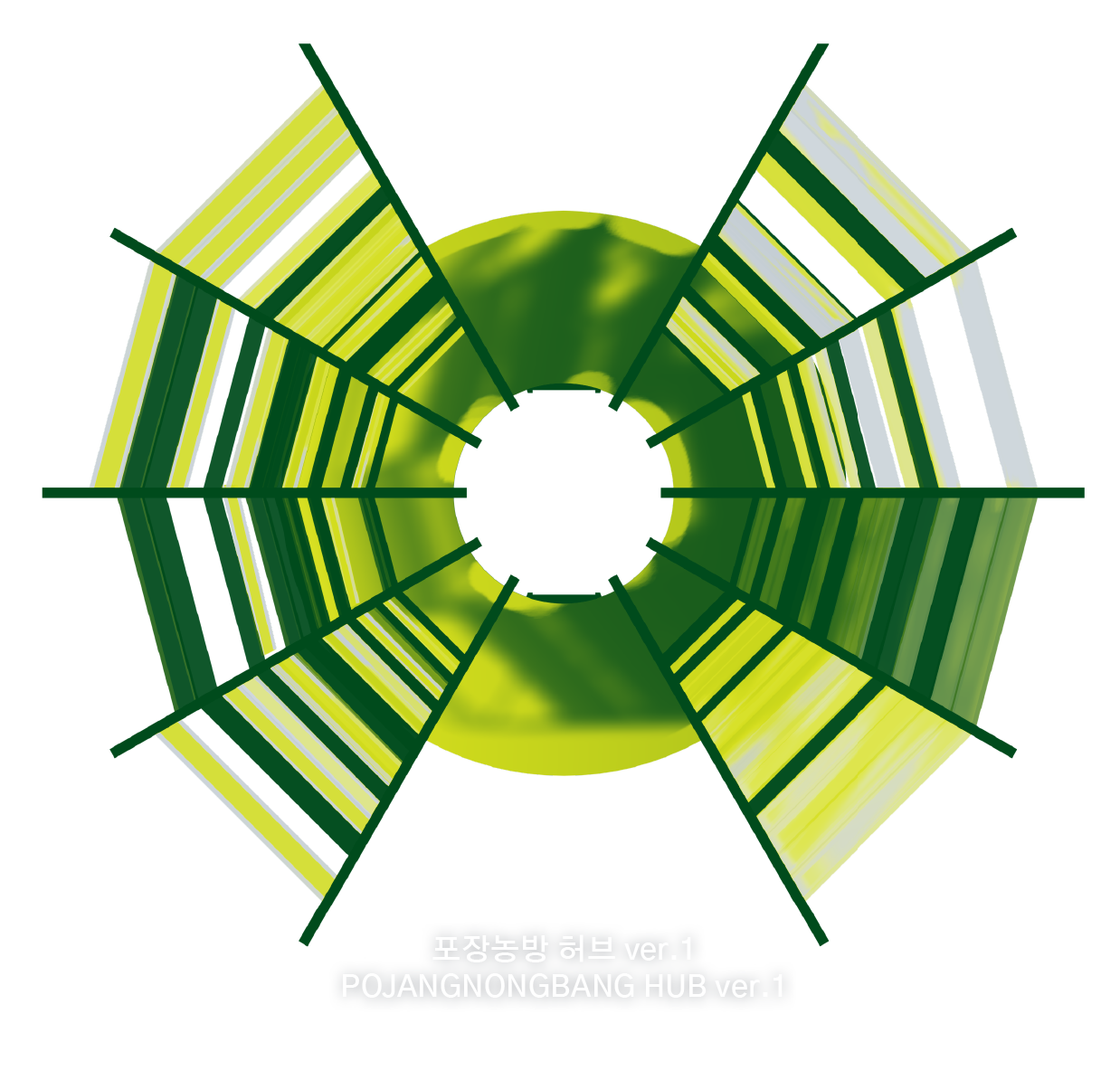 PoJangNongBang is rooted in two observations. Firstly, industrialised agriculture is failing us on a global scale. Compounded negative impacts range from ecological, for example soil degradation [1] and biodiversity loss [2] through imposition of monocultures [3], to social, such as the disregarding of indigenous knowledge or naturally resilient growing practices [4] and the loss of job stability for smallholder farmers in the hands of corporate land grabbing and oppressive transnational regulation [5].
Secondly, our cities are increasingly regulated spaces with scripts for how to use them set in concrete. From the bureau-corporate art of public sculptures, where a group of agencies control the commissions to build or simply replicate them, to a wider trend of spaces designed to remove the nuances and natural systems of daily life (which are considered inconveniences) to create smooth urban experiences [6], for example the gradual removal of informal networks of social capital in areas like Euljiro [7].
Approaching these tensions as artists and designers with a blend of research and production, we speculate and tread paths toward an emergent future where the concerns outlined above are mitigated through a creative reimagining of urban life. In this second iteration of the project we are focusing on how to build environmentally resilient and socially accessible urban resource webs that, through embedding themselves in existing systems, contribute to enhancing the natural regenerative potential of metropolitan spaces and the communities that exist within them. Cities have largely set the stage in recent acts of human civilization. In their districts and neighbourhoods, objects, ideas and organisms collide and coalesce to form complex networks of exchange. Being that they are overwhelmingly fabricated by human ingenuity, cities are often thought of as complete opposites to ‘nature’, which is increasingly a space city dwellers escape to in the hopes of a moment of escapism. Built up alongside cities themselves this distinction obscures the reality of the situation.
Urban networks actually spread much further afield than the city limits, you could see the supply chains that emulate from urban centres as roots, deeply embedded in and absorbing nutrients from ‘nature’ rather than exclusive from it. Where this occurs it is clear that even space potentially regarded as ‘nature’ is in fact just as regulated, if not more so. Think of a field of radish sprayed with insecticide which inadvertently wipes out groups of native pollinators like butterflies and bees. Conversely it is also true that even our most urbanised areas can contain complex webs of species with delicate and interdependent food webs. Certain species of roadside tree for example create micro habitats for a wide variety of caterpillars, meaning local bird populations are more likely to thrive. The core tension here is the conflict between humanities’ incessant desire to achieve regulated stillness, smoothness, efficiency and order versus the inherently unpredictable motion and change of the natural world.
PoJangNongBang is interested in investigating the qualities and tangibility of this imaginary border, exploring new forms of spatial value that blend social, creative, organisational, environmental, technological and commercial objectives. Developing environments that support a plurality of organic/inorganic forms, not just humans, will provide multi benefits to our urban sprawls. From a deepened collective sense of place, to healthier lives for all inhabitants. Ultimately this will contribute to a gradual erosion of the barrier between the natural world and cities, and the emergence of more sustainable urban design systems between the cracks in the existing homogenous one. 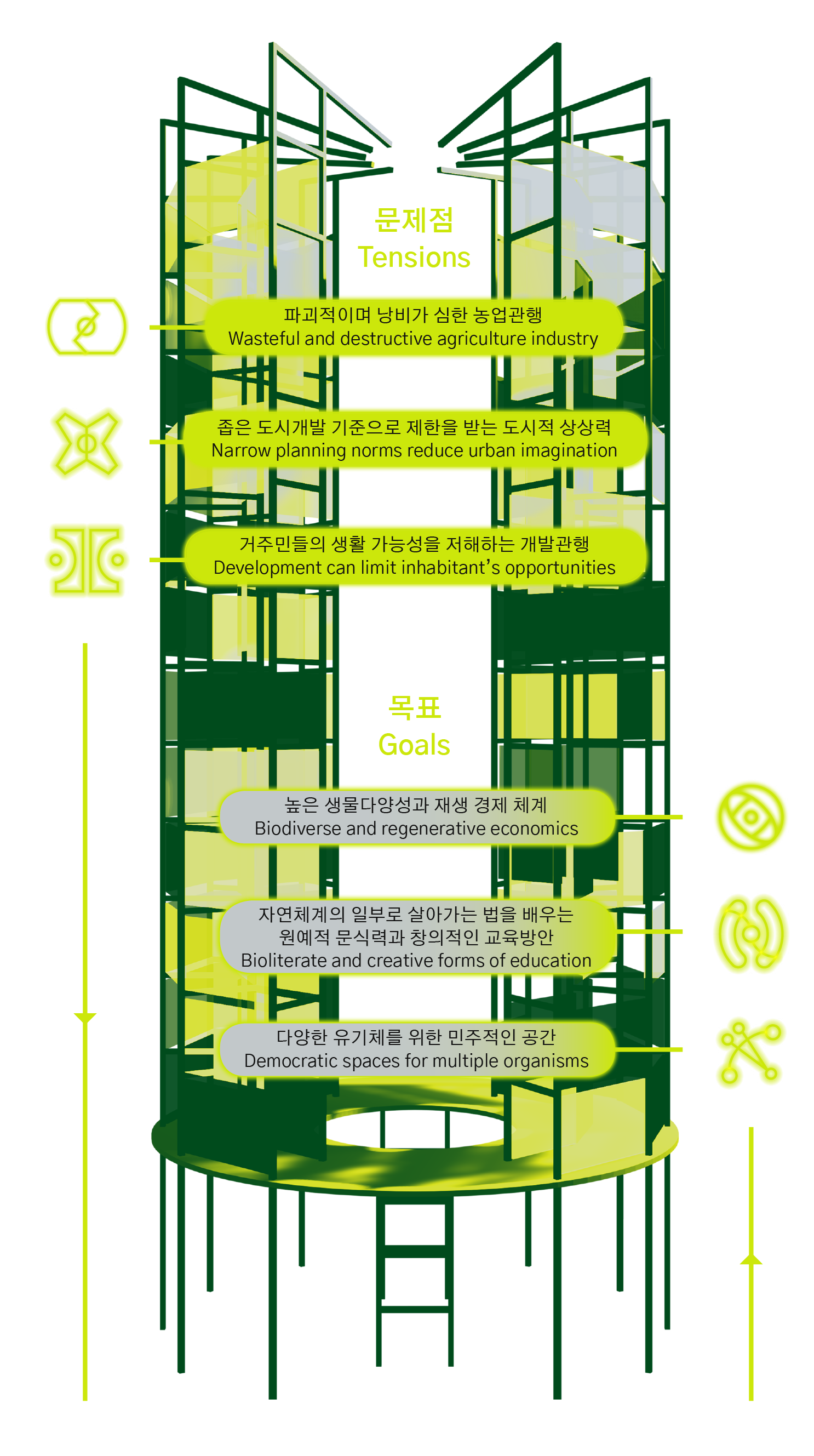 So why are these goals important? What do we stand to lose or gain? As the climate warms over the coming decades our food systems will come under further strain from reduced arable land, breakdown of supply chains and cost of environmental control measures such as fresh water supply. As the design of cities becomes more regulated we lose connections to the environments they exist within, locking ourselves into concrete boxes whilst outside the negative impacts, such as energy emissions, are also locked in. Whilst the most severe result of this could be food shortages, there are other more subtle effects, for example reduced economic opportunities (both rural and urban) and mental health complications.
To respond to these tensions and break the cycle we need a systems level understanding of the situation that can be activated at a local scale. The unifying concept of the PoJangNongBang network could be biodiversity [8], the measure of the number of species and forms of micro habitat that exist within a region. Taking this as a core value provides many benefits as Biodiversity is a key indicator for several major challenges of our time. For example diverse ecosystems are better able to regulate disease spread as carrier populations are kept in check by natural predators, they also support human economies across the globe and are highly effective at mitigating climate change in the form of tree based carbon sinks and buffer environments such as wetlands.
To focus this approach to the scale of cities we can use the idea of bioregions [9, 10] which are defined by the unique characteristics that occur in a certain area, such as climate, physical landscape, water, soil, flora, fauna and human habitation. Seeing cities as bioregions provides a new lense with which to interact and design within the changing context of the natural world [11].
Alongside biodiversity, the system should also feature a drive toward deeper understanding of the tendencies, capabilities and spatial possibilities of plants and organisms through their greater inclusion in architectural and spatial development in their living forms. Spatial interventions for regenerative urban design, such as building facades that provide highly specialised habitats, could operate as form finding processes that allow us to connect on a deeper level with the perspectives of these non-human actors [12].
Other related concepts include permaculture, an approach to land management that adopts arrangements observed in flourishing natural ecosystems. It includes design principles such as systems thinking, regenerative agriculture and rewilding. Another is commoning, derived from First Nations understandings of the world not as something we own but that we share existence with. These together suggest the design of contemporary cities should adhere to limits rather than the aim for expansion, focusing on what is not designed rather than what is. This is reinforced by Kate Raworth’s principle of Donut Economics which suggests the need for economic activity to stay within a social foundation and an ecological ceiling. 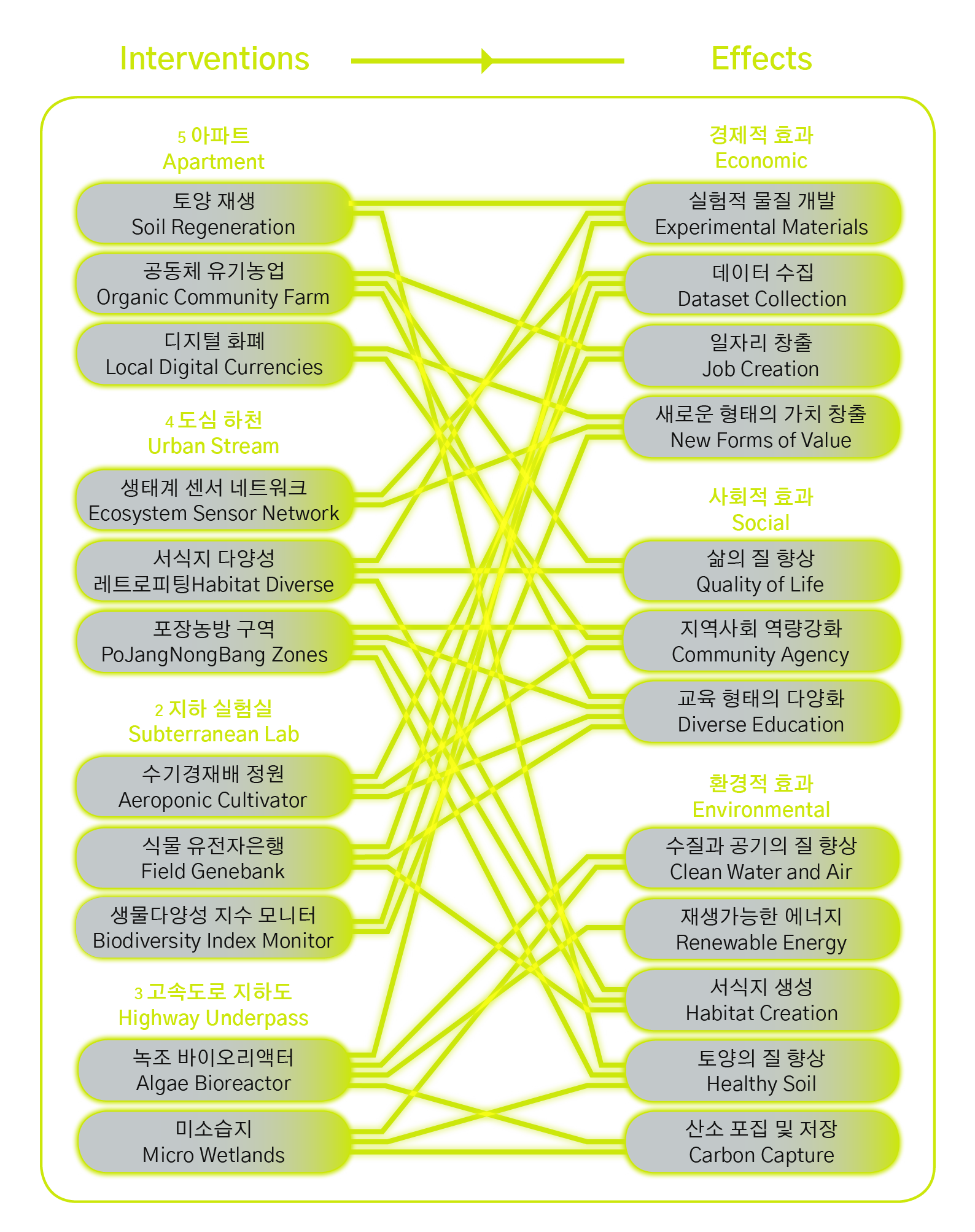 Outlined here is a set of interventions which together form a functioning system, this is based in the context of Seoul but offers many parallels with other large urban spaces globally. On the other pages you will find the elements of this system explored in more detail. They are dispersed into common urban typologies which are utilised as staging grounds to connect them with the present day. This does not compose a concrete assertion of form or function, these examples serve as inspiration for development of diverse responses to the goals and tensions outlined.
In practice PoJangNongBang could take the form of a social enterprise, community co-op or startup, working towards small scale collective ownership of urban assets between actors such as councils, citizens and local businesses with the aim of building networks around it’s goals. This would ideally lead to a shift in economic focus from linear systems of production to circular and regenerative activities that create knock-on positive effects and further opportunities.
An operational principle to work towards would be the self sovereignty [13] of PoJangNongBang as an entity, including the land it exists on [14]. In this way the system itself would be regarded as having the same rights as any human inhabitant of the city. This means it is able to gather funds in various ways: the sale of ‘products’ (such as edibles, pollution reduction, green space creation), investment from supporters of biodiversity and even its own digital currency. These can subsequently be used to employ citizens in maintaining and replicating PoJangNongBang across the city.