Streams are natural centers of ecological activity in urban areas, running through many city districts and providing infrastructure for animals and plants. PoJangNongBang can use them as supports to grow off, connecting different components and offering a public showcase of the positive impacts of the system. Cheonggyecheon is a great example of prioritising plants and animals in the city center, with diverse economic benefits including increased tourist activity and rising land prices, but how can this be taken further?

Gathering data on how a Bioregion changes over time is important to support the impact claims of PoJangNongBang. This data can be used to control the level of the biodiversity index and value of the digital currency. Using a network of sensors [1] to collect live feedback is the most effective method with minimal human impact. The data collected could include soil PH and nutrient density, air and water pollution levels or environmental conditions like humidity, light and temperature. Another data source is plants themselves, by monitoring the electrical impulses that plants generate in response to changes in their environment scientists are opening up new ways of understanding their behaviour [2].

Retrofitting is the practice of updating the built environment rather than demolishing and rebuilding new structures. It is the perfect method to increase the biodiversity potential of cities because simple changes can create a high impact [3,4] . For example, lightweight rooftop meadows packed with native flower and grass species will encourage insects and birds to make their homes [5] . Adapting existing infrastructure, including chimneys or other unused elements such as TV aerials and walls can also increase habitat development. Alongside this small spaces can be used to enhance the urban food web by planting fruit trees and vegetables [6], something that is already common in many parts of Seoul.

To enable ongoing collaboration with existing urban infrastructure, PojangNongBang micro zoning could be established in the same way areas are designated as residential, commercial or industrial but on a smaller scale. Giving over temporarily disused spaces like patches of rooftops to this classification is a good start, as it encourages new developments to take into account the needs of non-human actors. Taking this further the establishment of Community Land Trusts around these zones can safeguard development rights for existing communities above outside developers. Alongside the retrofitting techniques outlined before another potential use for these spaces is portable aquaponics [7] , this involves using a closed loop organic system to produce vegetables using water and edible fish. These systems can fit into shipping containers to be transported to new locations as they become available. Finally, new forms of public art sculpture could be created as a communication method between the ecosystem and humans, for example by converting the data of the sensor network into sound and lighting [8] or collection of plants’ aero chemicals for conversion into human wearable perfumes [9]. 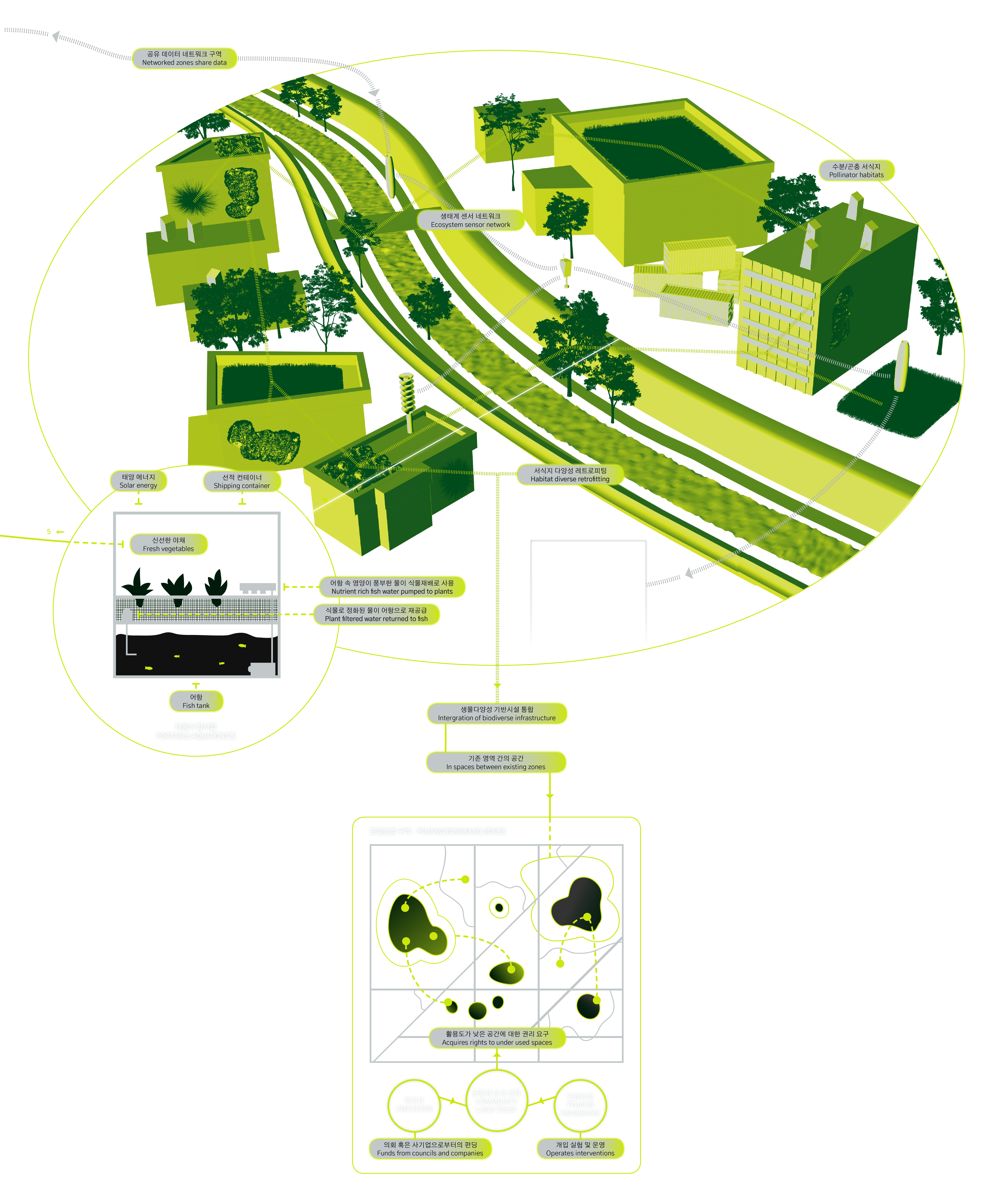